COVID-19 Reflection #2: Let Us Not Repeat The AIDS Tragedy! 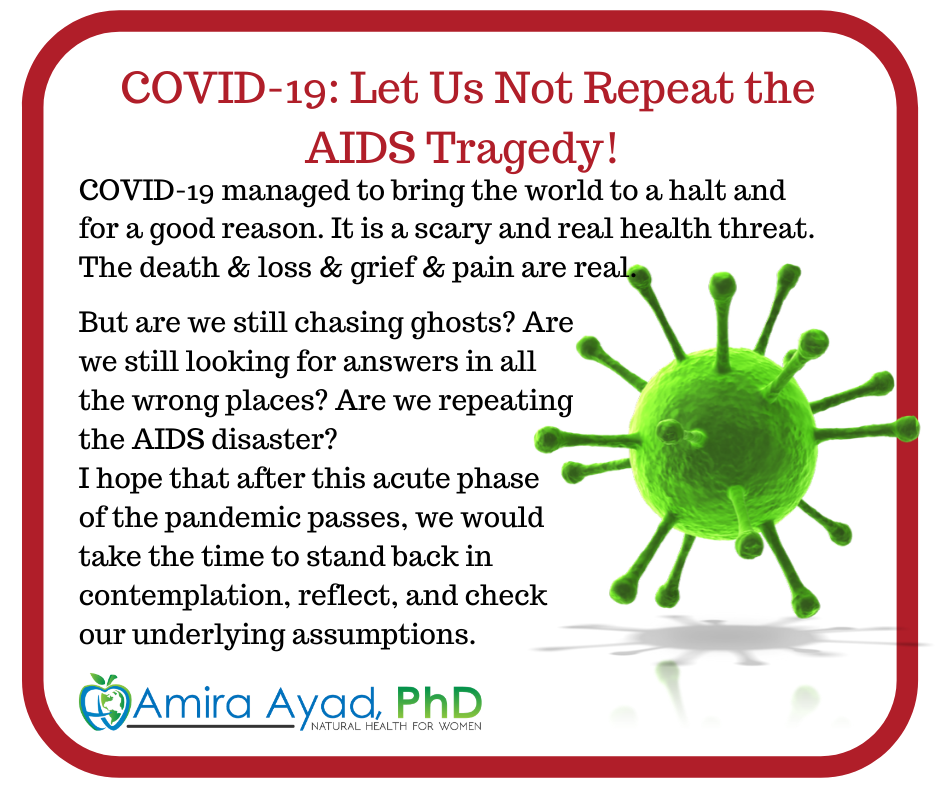 Many of the physical and pharmaceutical knowledge as we know it is built on theories, an estimated view of the world that we’ve been sold and naively embraced as “truth” while all who suggested it know for sure that these are mere theories.
Since we started the so-called “War on Cancer”, cancer cases are on the rise. Since we launched into the technological and industrial era, chronic illnesses are booming. Our medical model managed to add years to our lives but robbed those years off quality and dignity. What’s the use of more years if we are crippled by chronic illnesses and pains, our identity erased by dementia and Alzheimer's, or our life savings depleted by polypharmacy?

As we removed God from our Cosmos, we excluded the soul from healthcare and butchered morality out of medical and psychological interventions. We stripped meaning out of our lives, out of our conversations and we replaced our words with empty “plastic words” that sound smart and sophisticated but lack substance and ground.
We are feeding our bodies with empty calories and genetically modified toxins. We are disrupting our delicate human electromagnetic field with microwaves and 5G “technology.” We are feeding our minds on the propaganda of fear-mongering pseudoscience. And, we are further depleting our souls with disconnection and addictions.
Our media and propaganda machine managed to silence all voices of reason and punish any whistleblower labeling any objections and freedom of speech as “conspiracy theory.”

Where are we heading as a society?

COVID-19 managed to bring the world to a halt and for a good reason. It is a scary and real health threat. I am not among those who are claiming that it is all a fear-mongering tactic. No. The disease is real. The death and loss and grief and pain are real. But are we still chasing ghosts? Are we still looking for answers in all the wrong places? Are we repeating the AIDS disaster?

Professor Kary B. Mullis, the receiver of Nobel Prize in Chemistry in 1993 for his invention of PCR (the technique on which today’s COVID-19 testing is based), wrote “We have not been able to discover any good reasons why most of the people on earth believe that AIDS is a disease caused by a virus called HIV. There is simply no scientific evidence demonstrating that this is true.” Mullis goes on to describe his astonishment at how doctors still base their diagnosis and prescription of treatment on this now considered “fact.” In other words, we were faced with a real life-threatening illness (AIDS), we hypothesized that a virus (HIV) is the cause of that illness and we based all our subsequent decisions and actions on that hypothesis so much so that, with time, we even forgot the fact that this was a mere hypothesis, a theory that still bears many flaws and raises lots of questions. No wonder scientists have never been able to develop a vaccine nor find a real treatment for AIDS.

The current tragedy brings to mind the words of Peter Duesburg, the professor of molecular and cell biology at the University of California, Berkeley, talking about the AIDS epidemic, he said, “The answers to the epidemic do not lie in increased funding or efforts to make science more productive. The answers will instead be found by reinterpreting existing information. Science's most important task, much more than unearthing new data, is to make sense of the data already in hand. Without going back to check its underlying assumptions, [we] will never make sense of its mountains of raw data.”

John Maddox, the editor of Nature, the world's oldest scientific journal, wrote, “Is there a danger, in molecular biology, that the accumulation of data will get so far ahead of its assimilation into a conceptual framework that the data will eventually prove an encumbrance? Part of the trouble is that the excitement of the chase leaves little room for reflection. And there are grants for producing data, but hardly any for standing back in contemplation.”

I hope that after this acute phase of the COVID-19 pandemic passes, we would take the time “for standing back in contemplation.” I hope that as this pandemic was an invitation for all of us, on the individual level, to reorganize our life and recheck our priorities, it would also be an invitation for our scrupulous conscientious scientists, researchers, pharmacists, and physicians to reflect, contemplate, and “check the underlying assumptions.”

May God help and guide us all. Amen.