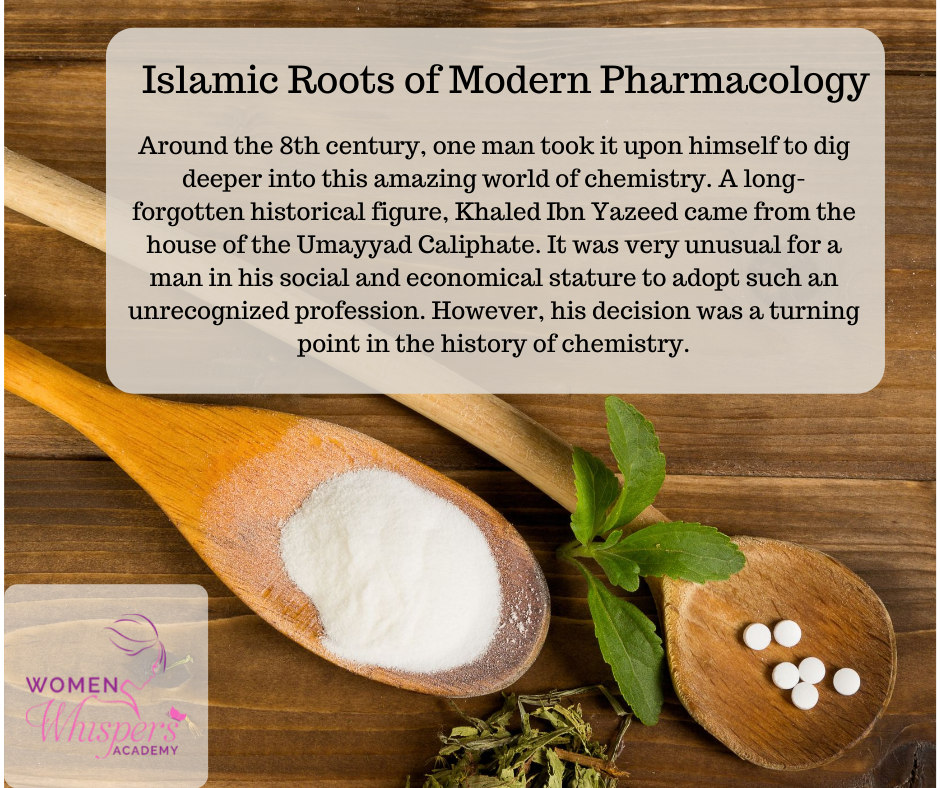 Around the 8th century, one man took it upon himself to dig deeper into this amazing world of chemistry. A long-forgotten historical figure, Khaled Ibn Yazeed came from the house of the Umayyad Caliphate. It was very unusual for a man in his social and economical stature to adopt such an unrecognized profession. However, his decision was a turning point in the history of chemistry.

Just as the Greeks and Romans had acquired their learning from ancient Egyptian and Sumerian breakthroughs, Ibn Yazeed started his journey by translating Greek and Roman references in the field. He studied chemical reactions and started his pioneering experimentations in synthesizing drugs and remedies. Ibn Yazeed set the foundation upon which chemistry and pharmacy could be studied which was later built upon by his successor Jabir Ibn Hayyan.

By the beginning of the 9th century, thanks to these two pioneers, pharmacy became a well-established independent profession with well-regulated rules and laws. Pharmacists were knowledgeable about drug use, compounding, preparation, and dispensing. They mastered dosage adjustment, drug interaction, and the prevention of drug adulteration.

Muslim physicians further developed the field of pharmacy. Famous physicians like Al-Razi (Razes), Ibn Sina (Avicenna) and Al-Kindi, contributed much to the advancement of this field of science. Being the most knowledgeable about body ailments and diseases, physicians were the most suited to develop and prescribe the cure. They combined their knowledge about medicine with herbal remedies, chemistry, and philosophy to develop an amazing body of work describing disease diagnosis, description of appropriate remedies, and the required dosages. Some of many outstanding references in pharmacology at the time and for centuries to come, include:

Building upon the work of these Muslim scientists, the modern Western World has founded its pharmaceutical knowledge.

The most important aspect of Muslims’ development to the pharmaceutical profession, though, was their honoring of the Islamic teachings while still basing their knowledge and studies on scientific experimentations and practical experiences. Additionally, they honored the whole human being, body and soul, and sincerely and ethically pursued their mission in easing people’s pain and relieving their sufferings. Physicians, like Al-Razi, advocated resorting to diet and herbs for treatment before referring to chemical drugs. His one-of-a-kind book, Tibb Al-Fuqara’a (Medicine of the Poor), described ways of treating diseases using affordable foods and herbs rather than expensive preparations and formulations.

While delving into this great history, I can’t help but feel awed by such wisdom and knowledge. And, I can’t also help but wonder when the achievements of modern-day Muslims will match that great era of human advancement.