The Dilemma of a Borderline's Wife 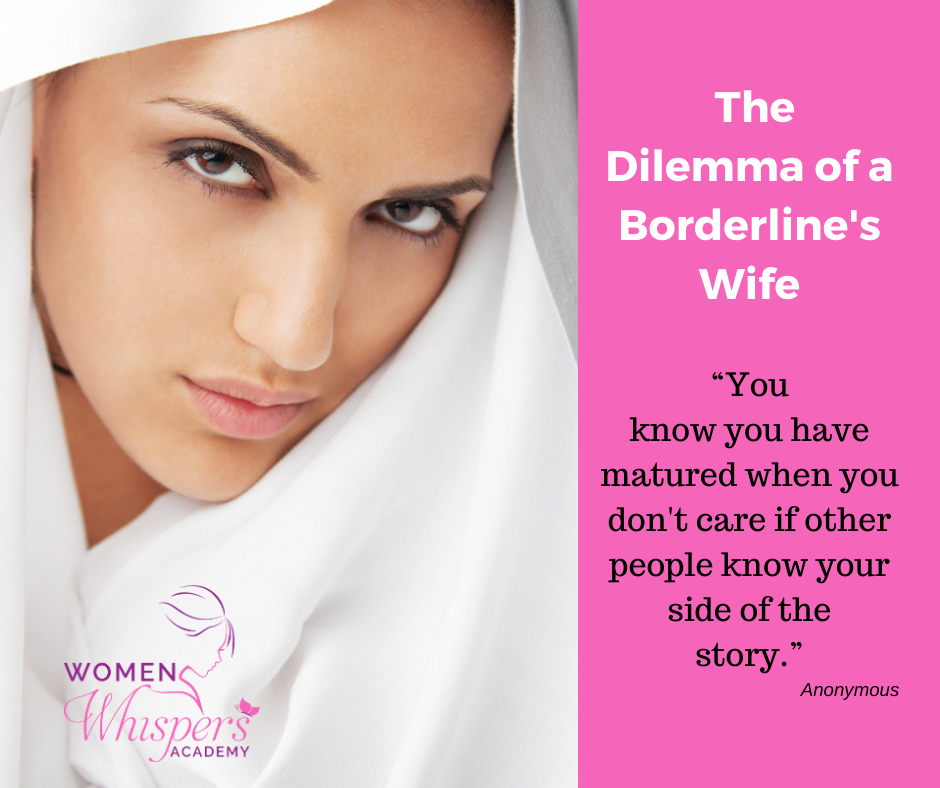 He made you doubt yourself, not only your worth but also your sanity. Life became a huge struggle… you’re caught in a constant whirlwind, never-ending drama. He feeds off drama. It fills his emptiness. His unpredictability drives you crazy. One day he is the perfect lover- romantic, giving, charming. And the next, he is not even there. He disappears without prior notice. Without any known reason. He just vanishes and leaves you with a note of guilt-ridden blame and threats. He’s always the victim and you have to apologize, to beg, and get down on your knees in order to prove that you deserve his presence in your life. Or, maybe he does not leave. He stays but tortures you with silent treatment. You have to keep guessing what have you possibly done to upset him... Either way, you need to beg and plead for forgiveness… By now, you are brainwashed into believing that you cannot survive without him. You believe that you are not worthy of better treatment. You are powerless and helpless. You’ll never be able to make it on your own. You’re a total failure. This is the message you are constantly receiving from him… Yet, before the world, he portrays you as a great, amazing, and highly accomplished woman… This portrait is essential to complete his perfect image… His image of greatness, of the perfect man, the caring and supportive husband who is always there for his wife… and who in the world would believe you if you dare to challenge this image? How can a man who speaks so highly of you be the same person who is damaging you and your kids? He is full of contradictions… contradictions that only you can see… The entire world sees his perfect face – a bit weird, maybe- but perfect. Aren’t all geniuses weird? You ungrateful woman! How dare you object or complain?

Soon enough, you find yourself isolated from the world. He has to make sure you are broken and lonely so that you’ll never leave him… this is how much he loves you - in his own twisted way. He cannot imagine his life without you. You have to remain his. He presents as the most confident human being, yet he’s so broken, he’s vulnerable. He’s helpless. He cannot survive on his own. Deep in his heart, he knows this fact. This is why he must keep you by his side forever. You have to remain his. He owns you and is taking you for granted. He breaks you… breaks your self-esteem, your spirit, your social life, your career, everything… so you only have him… So you remain his… So you could never leave. You are left with all those years of manipulation and emotional blackmail… all those weeks and months of silent treatment… all those times when he disappeared when you and your kids needed him the most… he just vanished and sent threatening notes telling you that he is abandoning you for good… all those times he left you and your kids with no money, no words, no support… all those instances when he showed his frightening face of anger for no apparent reason… all those times when you begged for forgiveness not even knowing what you are apologizing for… all those times when he left you broken, ill and depressed crying yourself to sleep and wishing and praying that you never wakeup again… How can you ever be the same again? He broke you, killed this beautiful innocent spirit inside you, whether intentionally or unintentionally… you don’t care any more… he made you not only doubt yourself but also hate yourself – hate that you are not good enough and never will be… hate that you are not worthy of love… you believed those lies… The truth is that he never actually loved you… he does not really know what love is. He’s empty, a hollow shell that used you to fill his emptiness and weld the cracks of his soul… You would have lovingly done that if he hadn’t destroyed you in the process… You might never be able to understand why? Why did he try to destroy the one person who loved him the most? Maybe your problem is that you looked at him as an idol, you put him on a pedestal, you refused to enjoy your own life until you see him fulfilled and happy… isn’t that the way you were raised as a girl in a patriarchal culture? The pious faithful wife should be the candle who burns for her husband to enjoy the light.

Psychologists see that the main characteristics of Borderline Personality Disorder (BPD) are underlying feelings of emptiness, deep emotional pain, instability of mood, self-image, and relationships, and impulsivity that is potentially damaging to himself and to those around him.[1] A person with BPD is usually very intense, oscillating between feelings of rage to depression in a very short period of time.[2] Although he seldom shows it, a person with BPD struggles with self-identity and dysfunctional emotions and usually consciously or subconsciously engages in self-harming behaviors.[3] They have poor impulse control and conceal a constant fear of abandonment. [4] They are usually impatient, unpredictable, and moody. They lack empathy and are unable to see beyond their own feelings and needs. They prefer to detach from social life and struggle with constant anxiety.

High functioning borderlines are living among us. They are “quiet”… their symptoms are hidden from the world as they somehow manage to navigate everyday life and cope with personal and professional demands.

I believe that many of the personality disorders are not strictly illnesses. These are people who have special talents and intellectual gifts. Many borderlines are known for their math genius, creative skills, and out-of-the-box thinking. The world needs their brilliant mind. God created it this way for a reason. Yet, they need to learn to deal with the outside world and see it from other people’s perspectives. They are victims of their genius brains. They don’t understand human emotions the same way most of us do. They process information differently… They lack empathy and are unable to see beyond their own needs. Their special brain function makes them confused, even terrified at times. Their erratic behavior is a self-defense mechanism for the emptiness and alienation they feel inside. They consciously or unconsciously sabotage their relationships because they are hungry for human connections, yet so scared of abandonment.

But, what is a wife to do? You tried… for years and years, you tried… You withstood years of emotional torture until you lost your health, your smile, your passion for life, your career, and almost lost your mind and even at times, your faith. You lost everything. For years, you sacrificed. Yet, it was never enough. The emptiness inside him is never fulfilled and will never be. You can never “fix” anyone especially if he believes that nothing is wrong with him… He is perfect, remember?

How do you know that it is time to leave? You are constantly wondering whether he is doing whatever he is doing intentionally or unintentionally? Is he purposefully hurting you? Is he hurting as well? And, should you even care? At some point, you stop caring… At some point, you finally decide to put yourself and your kids first… At some point, you decide to say no… you do not even try to explain… there is no point in explaining… no point in trying to justify your decision or rationalize it… In his mind, he will always be the victim. But, then, as soon as he feels that he will lose you, he will once more behave. It is a cycle that keeps repeating over and over again. Apologizing, crying, begging, offering love and sacrifices… anything to get you back…

But, the day has come. Enough is enough… You leave and this helpless loving puppy turns into a monster whose sole role is to destroy you. Yet, again, in his twisted mind, he is still the victim. You are the villain who dared to leave his warm loving nest, his golden cage. You dared to break the chains. Lies and cheating come so naturally to him… He is so confident and everyone believes him… Why wouldn’t they? He planned for this all his life. He chose you very carefully. He chose a trustworthy, honest, yet a broken woman who would never betray his secret or reveal his true nature to the world. He never lost his cool in front of others. He is in total control of his temper, of his emotions- as he simply hasn’t any – he has no emotions… No feelings… No empathy. This is not an exaggeration. This is real. He “understands” emotions with his rational mind. He interprets them, analyses them, and logically “gets” them, but he cannot “feel” them. He’s an empty shell, a dark black hole that slowly and skilfully sucked the life out of you that you didn’t even notice that you were suffocating. Like boiling the frog… you were slowly dying but you were totally unaware… you became a walking dead… an empty shell like him… you were just living wishing for those endless days to come to an end. And, then, the time came when you finally realized that he does not deserve you. He does not deserve your love… the time came when you finally decided to walk away forever… let his empty shell forever stay empty and cracked.

And, “You know you have matured when you don't care if other people know your side of the story.”