We Need A Paradigm Shift 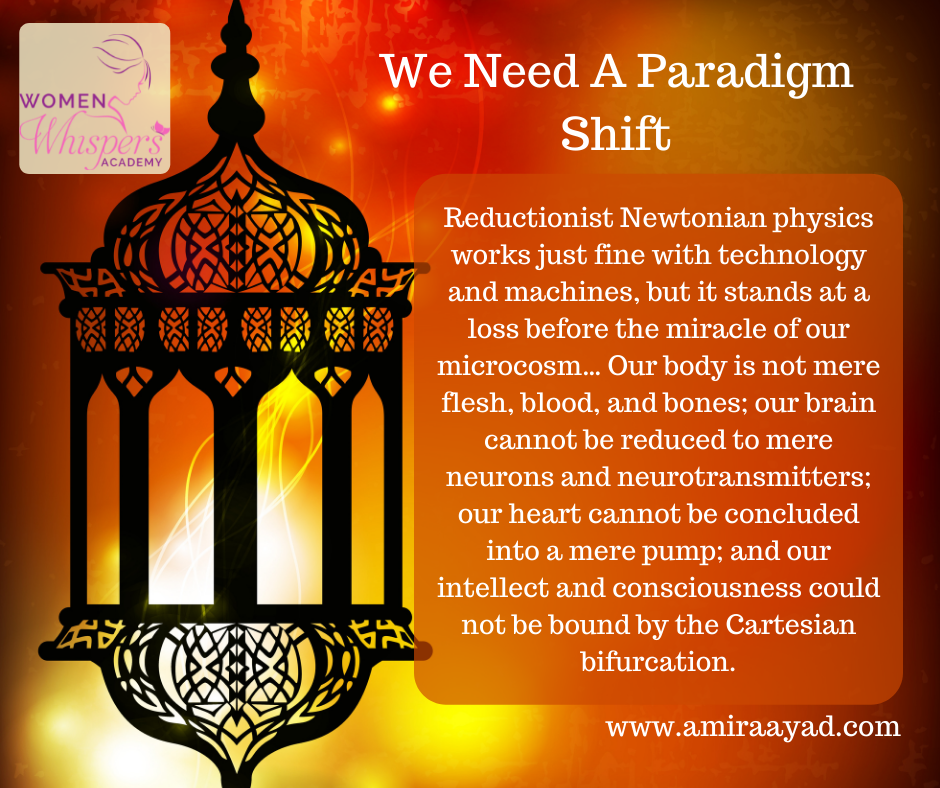 If we apply this to our modern-day healthcare and medical practice, intellectual knowledge would be the skills and wisdom of the practitioner. It is the heart-based, dynamic, and ever-unfolding truth that depends on the practitioner’s expertise as well as on the client’s needs, hopes, and context. This intellectual knowledge could be reached not only through the sound training and transmitted learning, that is to say, through the evidence-based research, the body of knowledge, and accumulated data from previous teachers, researchers, experts and authorities (in both the conventional medicine and traditional fields), but also through the inner work (the purification of the heart) that the practitioner needs to perform. Science, from a traditional Islamic perspective, has one goal: to draw us closer to the Truth, to God.

But, this is not the case anymore… in our modern-day, we relinquished the pursuit for the essence, for the Truth and became content with the physical matter, with what we can see, hear, touch, taste, or smell… what we can sense: what you see is what you get, basically. We forgot that the first page of our Sacred Book praises the believers for being “those who believe in the unseen (al-ghayb),” (Q. 2: 3). We dismissed this ghayb (unseen) for the “certainty” of conventional scientific dogma. But, what we failed to acknowledge is that there is no certainty in scientific dogma – there are theories, hypotheses, and speculations many of which do not hold the test of time and crumble under the weight of new scientific discoveries,[2] the weight of new idols that we choose to worship.

Let’s be clear here. I am in no way against science. I am a scientist, a pharmacist who researched and taught pharmaceutics, pharmaceutical medications, biochemistry, and body metabolism for years; and who is still fascinated by science and chemistry. Yet, for me, these are tools, not a destination. Professor Albert Szent-Gyorgyi, the Hungarian biochemist who won the Nobel Prize in physiology/ medicine in 1937, wrote in his autobiography,

“I wanted to understand life but found the complexity of physiology overwhelming. So I shifted to pharmacology. This, I found, did not relieve the difficulty. So, I went into bacteriology, but found bacteria too complex, too. I shifted on, to physicochemistry and then to chemistry, that is, to molecules, the smallest units in those days. Ten years ago I found molecules too complex and shifted to electrons, hoping to have reached bottom. But Nature has no bottom. If Nature puts two things together she produces something new with new qualities, which cannot be expressed in terms of qualities of the components. When going from electrons and protons to atoms, from here to molecules, molecular aggregates, etc., up to the cell or the whole animal, at every level we find something new, a new breathtaking vista. So now, at 68, I am to work my way up again following electrons in their motion through more extensive systems, hoping to arrive, someday, at an understanding of the cellular level of organization.”[3]

For all traditional cultures, science has always been a tool that helps human beings in their pursuit for the Truth, for the Sacred. Somehow, in our modern world, we managed to turn this tool into a tyrant whose only goal is to conquer the world and subdue nature. When I decided to study pharmacy, years ago, I was fascinated by my grandmother’s pantry full of home remedies for every conceivable illness; I loved herbs and was enchanted by their natural powers of healing… I was disillusioned… the way pharmacists and modern-day conventional scientists approach herbs robs them of their soul, of their essence, and reduces them into Latin names and chemical formulas. We extract the one ingredient that “science” proves to be effective and discard the remaining of the herb considering it useless. But, who are we to judge?

There are some therapeutic classes that we can only find in traditional herbal medicine like:

Terms like these teach us that herbs have some form of inherent intelligence, they have an inherent wisdom that is lost when we extract only one ingredient that we think is the active one -or even worse, when we try to replicate the chemical formula of this ingredient and synthesize it in our labs from coal tar and crude oil by-products that have nothing to do with the original herb- and stuff it into tablets or capsules expecting it to perform its magic.

Years back, when scientists discovered the calming effect of Kava Kava, a herb used by Native Americans for anxiety, they did what they do best – reduced it into one chemical ingredient they thought responsible for the pharmaceutical action: Kavalactones. The Kavalactones were extracted, purified, refined, stuffed into capsules, and mass-marketed. Soon enough, cases of liver failure started to be reported… It did not make sense; Native Americans have been using this herb for centuries with no reported side effects… It turned out that God who created the Kavalactones, also created another ingredient in the same plant, a powerful antioxidant that helps the liver detoxify and break down the lactones once their job is done. When we reduced the plant to only the anti-anxiety chemical, our body failed to eliminate it so it accumulated in the liver and caused more harm than good.

Reductionist Newtonian physics works just fine with technology and machines, but it stands at a loss before the miracle of our microcosm… Our body is not mere flesh, blood, and bones; our brain cannot be reduced to mere neurons and neurotransmitters; our heart cannot be concluded into a mere pump, and our intellect and consciousness could not be bound by the Cartesian bifurcation.

We Need A Paradigm Shift

We cannot understand and acknowledge our human complexity without integrating science and theology, physics and metaphysics. And, if we are to effectively integrate them, we need a paradigm shift. In the modern Western biomedical model, the scientific research is still based on and undergirded by the Cartesian-Newtonian dualistic, linear, and reductionist approach to life. This view “not only presents an inaccurate vision of human existence but also contributes to the disease of modern society.”[4]

Nowadays, evidence-based healthcare relies heavily on statistical analysis of collected data. The use of statistics, which began in the 1800s by eugenicists, aimed, and in most cases is still aiming, at establishing the “normal distribution” of human beings in an attempt to reduce deviation from the norm. But who gets to decide what “norm” is? This idea of the norm in itself is a tyranny that ignores many aspects of the human experience.[5] Besides, “the delusion that […] the accumulation of a large number of facts can be of use by itself as a proof of a theory,” is another oversimplification feature of our modern-day scientific inquiries that focus on quantities missing the real essence.[6] Even studies concerning spirituality and health “must conform to the canons of scientific research which focus primarily on the relationship of behavior and outcome,” overlooking:

We need to broaden our understanding of scientific evidence to include metaphysical first principles and include thoughts, feelings, relationships, and a holistic view of life.[8] We need to recollect the scattered pieces of our human existence and reconnect the severed ties between our hearts/ souls and our bodies.

[6] René Guénon, The Reign of Quantity.